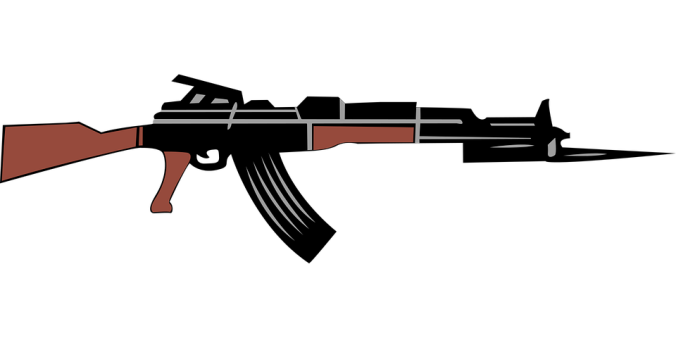 America considers itself a Christian nation. We are also a nation armed to the teeth with guns to hunt food and guns to protect ourselves from other people with guns. We tell ourselves that we have the right to bear arms based on the Second Amendment of our Constitution. To protect ourselves against the tyranny of the federal government. How’s that all working out for us now, America?

We’ve put ourselves in the position of having to own guns to protect ourselves – from each other. Does that sound like a Christian nation? A nation of people that love each other? Don’t kid yourselves! We even let the NRA run the legislative branch of our government.

The first guns I ever saw were a rifle and a shotgun standing in the corner of my grandparent’s bedroom. My cousins and I knew what they were for. They were for hunting. That was back in the day when hunting for food was still commonplace, even necessary. There wasn’t much hunting for sport. In fact, I can hear my grandfather ask who would kill an animal for such a thing as sport?

Our gun laws are so lax that mass murderers and the mentally ill buy guns and gun equipment. What Christian nation would allow that? What Christian would object to tightening up the gun laws so that would not happen? Remember Sandy Hook? Remember Las Vegas? Remember all the rest? Now remember the NRA? Who gave the NRA their power?

We did. The supposed Christians. Who has caused the mass murders? We have. The people. We have refused to support tightening up the gun laws. See that broken window in the Mandalay Bay hotel in Las Vegas? Who caused that?

All of us Americans in this supposedly Christian nation.