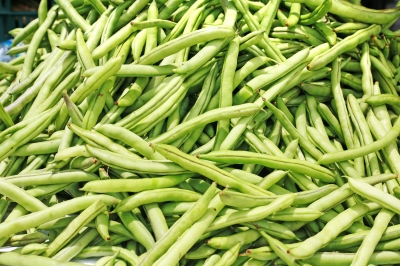 The family garden is not as common in Appalachia today as it was in the past, but they still can be found. They are located in the creek bottoms between the mountains. During the past three centuries, family farms growing this and other crops in those creek bottoms were common.

Today, we buy our green beans in grocery stores and never think about what variety they are. Not so in Eastern Kentucky and Appalachia both in the pioneer days and even today. Green beans were bought from family farmers and the variety was very important. Maybe the most popular variety was “white half-runners.” This is a whitish climber bean with an excellent taste. Another variety is the pole bean which is also a climber, but a much bigger bean than the half runner. Others are tenderette beans, greasy beans, Kentucky wonder beans, and different varieties of heirloom beans. One variety of heirloom bean is this writer’s favorite bean – the old-fashioned cornfield bean. These were all grown in the past in Eastern Kentucky and some are grown today. Many have become “heirloom beans.”

Heirloom seeds of any kind are seeds that are not found in the general marketplace in modern times. They are kept by farmers and seed-saving organizations and passed down from generation to generation. They are closely guarded, but this is a topic for another post.

The cooking technique for green beans was quite different than it is today for people who do not reside in the area. Green beans were cooked until they are very tender and with some sort of seasoning, usually in the form of fatty meat such as ham hock, salt pork, or something similar. Unless you were very careful, they could be quite greasy, but the Appalachian people liked fatty food. My grandmother lived on fatty pork feet and lived to be 97. She also worked hard, hard physical work, all of her life!

You could not have green beans on your table for a meal without corn bread. Corn bread was a little different than it was, for example, in the desert southwest. It was usually made with white cornmeal, though some used yellow corn meal. Buttermilk instead of regular milk was used. It was cooked in an iron skillet seasoned with lard. Many of the early Appalachian people existed on beans and cornbread. My own mother liked to have cornbread and milk for dinner.

Would you like the old recipes for green beans and cornbread from Eastern Kentucky? These were my grandmother’s, handed down to her by generations of women who came before her:

A piece of fatty meat, such as ham hock

Cover with water and boil the water down, then turn down the heat

Put a lid on the beans and cook slowly for 1-2 hours until the beans are very tender and the water is mostly gone.

Preheat the oven to 450 degrees.

One cup of white or yellow corn meal, your choice – do not use self-rising

One cup of white flour…..do not use self-rising

Buttermilk…..enough to make the mixture smooth and stirable but not runny

While you are putting together the cornbread, have your iron skillet getting warm on the stove top with a couple of heaping tbsp of lard in it. Be sure the lard is melted.

Pour the cornbread mixture into the hot skillet. Careful! This will be hot.

Carefully place the skillet full of the cornbread mixture into the oven.

Bake 15 minutes or until the cornbread is brown on top. Remove from oven.

In the next step, CAUTION. Be careful and don’t burn yourself!

Have a plate ready. Turn the skillet upside down and dump the cornbread onto the plate. With another plate on the back of the cornbread, flip it over. Put a knife under the cornbread so it won’t sweat.

Sit it on your counter to cool. Done!

Delicious, but not so healthy in modern times. In another blog post, I will give you my own personal version of these recipes that I have made a little healthier!

These recipes helped keep the pioneers’ stomachs full as they lived their very hard lives in the mountains of Eastern Kentucky. They needed more fat in their diet than we do in 2016 as they did hard physical labor all day and their bodies required the extra calories and extra fat. #writers #amwriting #blogger #bloggerswanted #culture #history #Appalachia #EasternKentucky

Follow The Write Scribe on WordPress.com
Join 589 other followers