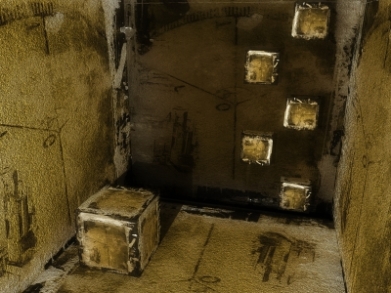 Caves. Rock ledge overhangs. Primitive cabins. In that order. That is where the mountain people of Kentucky settled after they made the difficult trip to what would become the Commonwealth. As the people came into Kentucky through the Cumberland Gap — from North Carolina and across the mountains from Virginia, they experienced a really arduous journey. The trip across the mountains from North Carolina and from western Virginia was treacherous and extremely physically taxing. As of 1782, about 4,000 pioneers had settled in Kentucky and they were the ones who had made this exhausting trek. By 1790, there were 40,000 settlers in Kentucky and the increase in settlers had largely found their way to Kentucky via the Ohio River. Kentucky was settled by the people from Virginia, North Carolina, Maryland, and Pennsylvania, in that order.

As the pioneers made their way over the mountains to the south and east, they most likely lived in cave-like structures along the way, when they could find caves not inhabited by the black bear. When they arrived in Kentucky, caves were their first living quarters and they made them quite sophisticated on the inside (photo, top left). After caves, the settlers moved to rockhouses. Rockhouses were under cliff overhangs and were held up with poles, a technique probably borrowed from the Cherokees. You can find locations where rockhouses existed even today, one in Magoffin County, KY near this writer’s family home. But, it wasn’t long until the log cabin came along.

A lingering question is where did log cabin architecture come from? It didn’t come from the Native Americans since they did not have the axe as a tool until they got it from the white settlers. It probably did not come from the predominant nationalities of settlers, the Scots, Irish, or English, because those countries are mostly treeless. Many agree that settlers from Sweden, Switzerland, and southern Germany brought the idea of log cabin architecture to America and it made its way from where they originally settled in Pennsylvania to the Kentucky mountains. There was a small German population in Kentucky.

There is some confusion about where log construction came from, however. The word “cabin” is Irish. The log cabin’s construction seemed to be Irish based on the fact there were openings under the eaves instead of gables. Log cabins came before log houses on the frontier. The log houses were probably based on Germanic construction techniques and even included houses with the dog trot plans seem so frequently in Eastern Kentucky. Both were lumped together and called cabins, however.

Cabins were more crudely constructed than houses. Cabins were built quickly from logs notched at the ends, chinked and daubed, or sealed with stones and mud, with chimneys made of sticks, rocks, and mud, and they usually had no windows and a dirt floor. The roof was made of bark. Houses were more carefully built. They had windows and floors and chimneys made of stone. Their roofs were wooden shingles.

This essay describes the progression of housing only in Eastern Kentucky during the late 18th century and very early 19th century. Some parts of Appalachia were more progressive and, by the early 19th century, had moved to frame houses. Those were available only to the wealthiest settlers.

*Note: The photo of the log cabin above was taken by this writer. It is located in a display park around the Magoffin County Historical Society in Salyersville, KY. It is an actual cabin, taken from the county, and rebuilt for display in the historical society’s park. This writer’s great-grandparents built and lived in a cabin very much like this one and raised their five children. Copyright 2016. All rights reserved. #amwriting #writing #blogging #history #appalachia

Follow The Write Scribe on WordPress.com
Join 586 other followers