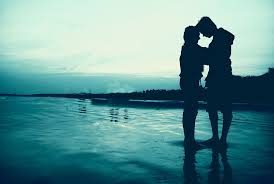 It only happened to Rachel once. Maybe because, after that one time, she never let it happen again. If it had happened again, she hadn’t recognized it. She had walked into his office that one day, the day she’ll never forget. His desk faced the right wall. The door was open. He was at his desk, looking down, reading something. She reached in to knock at the open door which swung open to the right. As she knocked, he turned toward her.

She had to keep herself from gasping when his eyes met hers. They were laughing eyes. Dark, dark brown in color. Mesmerizing. They grabbed her eyes and held them.

Rachel couldn’t speak. She had forgotten why she had come to his office.

She mumbled, “Sorry, wrong office.” Then she fled down the hall. Back to her own office. She was breathless when she sat down at her desk. She knew his name. She quickly remembered why she had gone to see him. She couldn’t go back, but she had to. He was going to be her professor in a class this semester.

Rachel was a research assistant at the University of South Florida. She was pursuing her Ph.D in Computer Science and Technology. Peter Fitzgerald was an Associate Professor in the Department and her professor in an upcoming class. Rachel felt like she’s just been hit by a train. Could you really fall in love at first sight? Rachel was far too sensible to think that. It was just a moment. Everyone had moments now and then. It would pass and the next time she saw him, he would be just another man on the street.

What Rachel didn’t know is that Peter had felt the lightning bolt as well. He wondered who that girl was. Was she an undergraduate student? A graduate student? He had to find her. See her again. He walked around through the halls of the Technology Building, but he didn’t see her anywhere.

Early that afternoon, Rachel had Peter’s class. She dreaded it. How would she face him after fleeing his office. She slipped in from the back as he was calling roll. After class, he walked up to her.

“You didn’t get here in time for roll call,” he said.

“Please follow me to my office to fill out some information for me.”

Suddenly, Rachel realized she was daydreaming. That day had been so long ago. Rachel couldn’t imagine why it had popped into her mind while she was driving down the road in South Florida. She hadn’t thought of Peter in many months, although he did pop into her head from time to time. She was successful in shoving him out of her head these days. She was happy with her life. When she did think of Peter, she usually thought of the end of their relationship. Today, instead, she had thought of that very first day.

The Glory Days. They had certainly had them. For years. The last time she saw him, those brown eyes didn’t sparkle any more. He said he was happy, but his demeanor and his eyes said something different. He had settled. Settled for what made him content at the moment. That was all right with Rachel. He wasn’t hers to save or care for.

Only one thing made Rachel sad now. She wished she could have emotionally let him go sooner. She would have lived a happier life. Instead, she had waited and hoped that one day, they would be together. But, it was not to be. She’d had relationships. Lots of them. She’d even been married. No one had ever touched her heart and soul like Peter. Now she wondered if it was because she never gave anyone else the chance. It was probably too late now.

Rachel remembered the day when Peter looked at her, after they made love, and said, “In your eyes, I’ve found the missing pieces.”

She felt bound to him then. That was right before he left her forever.

#fictionfriday is brought to us by Simply Marquessa