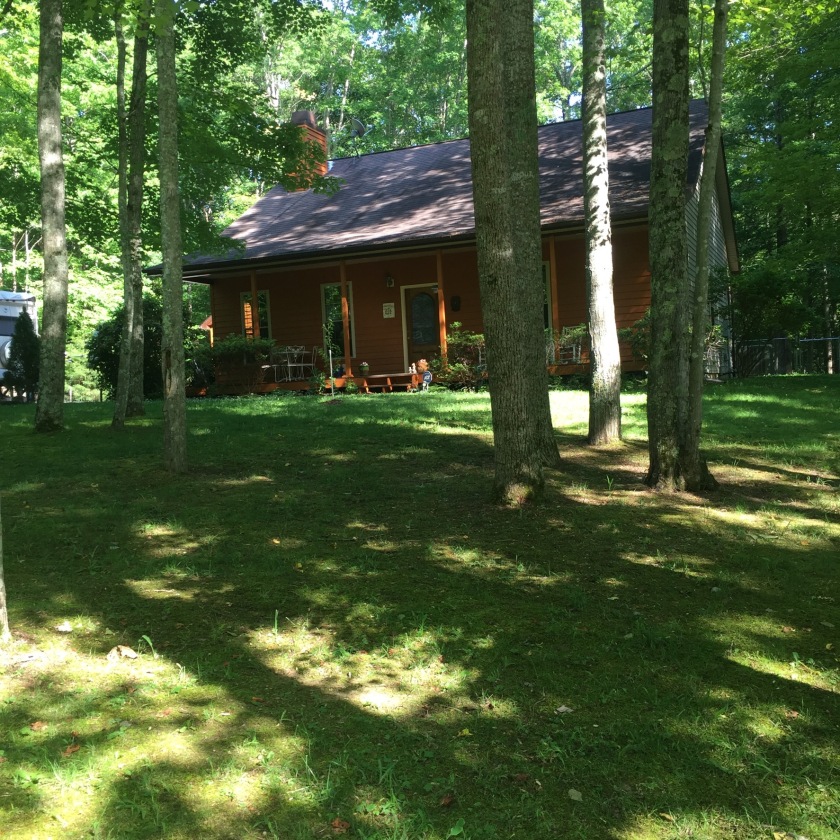 When I first moved to my home, 18 years ago now, I lived on a gravel, country road in a rural county in my state and my house was the only occupied house on the road. Life had been tough for me over the preceding few years and I needed to retreat, regroup, heal. I was also moving closer to my work after many long years of commuting. I loved it here. After being a city girl for 25 years, it was a restful sanctuary. My little cabin in the woods.

You see, I live right in the middle of the forest. Or I did. That part of the story comes later. There are still lots of very tall, probably second or third growth trees, mostly hardwood, around me. This area is known as “the hardwood capital of the world.” It is green, very green, dense, and beautiful. Most of all, it was private. I needed private. Most days, it seemed there was only me — and the wildlife. Beautiful birds. butterfly’s, one species which only lives on the particular mountain where I reside. Lots of whitetail deer.

My state is considered the number one state, at least by many hunting websites, in which to hunt whitetail deer. I’m not a hunter so that is mildly disturbing to me. I do understand, however, the need to reduce the herd from time to time. As far as the population of the whitetail deer is concerned, this state is always in the top ten.

In the early days of my residence at my home, you could certainly tell that was true. I saw deer every day, a thrill for me. At first, they were skittish. I got the feeling they felt like I was encroaching, which, of course, I was. It is, after all, their land. So I bought some deer corn, cheap in those days, and put it out on the ground. They came to eat their corn and acted only mildly suspicious of me as I peered at them out the window. As time passed, I learned to tell the difference between the does and the bucks and learned that the little fawns showed up for their deer corn around June. The deer learned they were safe here and came every morning and evening. I made their deer feeding station a little more friendly for them. I added a real feeding trough, made by my cousin-in-law, and a salt block. I think the deer felt right at home. So did I. One of the highlights of my day was watching them.

That was then and this is now. I don’t have quite as many deer at the feeding trough as I used to. More houses have been built on the now-paved county road which means more people, more cars, but the deer still come. Until today. Today, I found out that the lot that adjoins my lot, right by their feeding trough, is going to be stripped of its trees and a house is going to be built 15 feet from my property line and right next to their food. When that happens, I will lose my deer. My friends for 18 years.

To me, this is a sign. It is time to move on if this happens. If that house is indeed built,  it may be time for this writer to find another sanctuary. The quiet will be gone. The deer will be gone. All the things I moved here for will be gone. It would be masochistic to stay.

So, I will wait a bit and determine if that offending house is going to be built. If so, I may start looking for yet another sanctuary. Writer’s need a retreat. The next one probably won’t be in the woods and there probably won’t be deer. But, I intend to find a special one.

Oh yes. The title of this post. “The Deer on the Porch.” One morning I was getting ready for work and I heard someone (I thought) clopping around on my front porch. I went to see who was at the door. It was a whole host of deer, walking around on my porch and one of them was peering in the glass!

They call the development of lots in a subdivision, even a rural one like mine, “progress.” Is it progress? It doesn’t feel like progress to me tonight. It feels like possibly having to leave home and leave my friends behind. It feels like I am at the mercy of a ruthless land developer who cares nothing about people or places or wildlife or life in general, but just money. It feels like that particular ruthless developer, when he chose the lot on which he was going to build, knew I would value my privacy enough to consider buying the lot from him rather than letting him build and he is price-gouging me. In coarser language, it’s called extortion.

This writer is a survivor and I have survived worse. This particular ruthless developer built my own house and I spent lots of money and time getting it fixed due to shoddy workmanship and the fact he didn’t pay all the subcontractors and walked off the job before it was completed. Not everything is fixed….even after 18 years. So, I have issues  with this particular ruthless developer. If he continues his planned project on the lot next door and without giving me adequate time to raise the cash I need to buy the lot or negotiating a reasonable offer, then I will have more issues with the ruthless developer. The house he will build will likely have workmanship as shoddy as my house did, before it was repaired. I wonder if anyone will buy it?

I am not going to be at the mercy of anyone, even a ruthless land developer. Just remember. There is always something you can do to help your circumstances. And I am going to do it. Progress? Perhaps I can keep my sanctuary here on the road in the woods and won’t have to look for another one. I hope my deer on the porch will remain on the porch. Stay tuned!