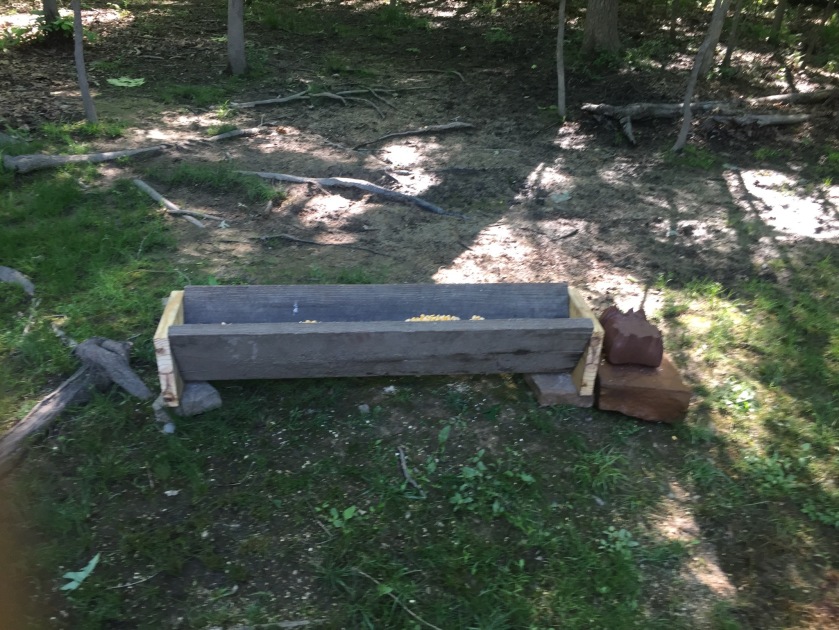 It’s a joy to get up in the mornings and have my cup of tea with the deer as they have their early morning breakfast at their feeding trough. In my post about the deer on my porch, I told you about them peering in the glass front door at me in the early mornings. That isn’t the only playful thing they do. They tiptoe past their feeding trough, getting ever closer to the house, trying to peer in the windows and see if anyone is here to fill their trough with food. Their beloved deer corn. Before I know it, I look up and the driveway space between the house — my dining room window — and their feeding trough is full of deer.

Deer of all shapes and sizes. I have a small buck with spikes for antlers, covered in velvet at this time of year. He’s a yearling but he’s getting big in his shoulders. Bucks start bulking up at this age. I have a number of does coming to the trough….and my driveway. I have some large does this year. It appears that a few of them are about to give birth as their bellies are full and round. It is time for them to drop those fawns so they can grow and thrive before winter. Other does are a bit small, which is why we feed the deer. There is such a large herd here in this state, and in my area in particular, that there isn’t enough food for them. We have encroached too much on their habitat.

The one deer that stands back a bit is the big buck. He isn’t shy, but cautious. This is probably his deer herd. He starts at every noise but he seems to trust being here in my yard. He probably grew up from a fawn here since I have had deer for almost 18 years. He has eight points on his antlers, also covered with velvet. He is quite a beautiful specimen but I worry he will no longer be with us after hunting season. I try to keep him close with lots of food and a nice habitat. He seems to favor one of the does and always comes with her.

No fawns yet, but it is always late June or even July when the does start bringing their babies to eat their first corn at our deer trough. That is a special time of year for me.

This is the time of the year when the deer all get along — bucks and does alike. No fighting at the deer trough which does occur at other times of the year.They are playful with each other which is a fun to see early in the morning.

When they congregate in the driveway, I know it is time to take them their breakfast. When I take a bucket of corn out to the feeding trough, they run back just barely into the edge of the forest. The minute I turn my back to walk into the house, they all make a run for the deer trough. If I walked slower, I think they would knock me over.